As we slowly move towards making the workplace more equal, with measures such as period or menstrual leaves being a hot topic, Eshna takes a look at the paternity leave policies in India.

On June 3, 2019, food aggregator and restaurant discovery service provider, Zomato introduced a policy whereby paid parental leave for a period of 26 weeks would be provided to its employees, thereby creating ripples in a system which has grown to disregard paternity leaves, and consequently the roles and responsibilities of the father in child rearing. An in-depth report by FeminismInIndia, talks about the same.

“So far, the Swedish furniture brand IKEA is the only one that offers a 6-month long parental leave benefit to its male and female employees in India. This is not surprising since the country of the brand’s origin, Sweden is one of the leading countries offering equal parental leave schemes in the world. It is in this respect that Zomato’s policy becomes particularly impressive.”

While admittedly, Zomato’s policies are not perfect, with several loopholes and aspects that are perceived to be satisfactory only in prima facie view, they are a step in the right direction, as they serve to spark conversation around parental leaves in India, with the unisexuality of the policy also being inclusive towards same-sex couples. The long duration of the leave, 6 months, has been cited by former Minister for Women and Child Development in India, Maneka Gandhi for not introducing the concept of paternity leaves in India, as they believe it would be used more as a paid vacation than actually sharing in household responsibilities surrounding childcare. The concept of a 26 week long parental leave is also met with great hostility by employers in India, as companies do not want to sponsor such long durations of leave for their female employees. 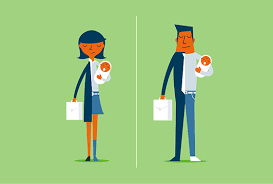 The concept of parental leaves in India, especially for the father has not gained much traction in India, owing to the staunchly patriarchal framework of society, where employees are still biased towards hiring female employees solely because they feel that the productivity value of female employees is much less as they have to take maternity leaves.

The implementation of MB Act is unsatisfactory and limited, owing to the aforementioned hesitation of employers regarding such long leaves.

When it comes to paternity leaves, the situation takes an even more disappointing turn. Paternity leave is available to only central government employees for 15 days under the All India and Central Civil Service Rules.

A flimsy attempt was made to introduce a Paternity Benefit Bill in 2017. This bill never became a law. In the Chander Mohan Jain v. N.K Bagrodia Public School case of 2009, Chander Mohan Jain, a private school teacher moved to the High Court of Delhi challenging the rejection of his paternity leave application and deduction of his salary by N K Bagrodia Public School for taking leave to take care of his wife and the newly born child. Despite there being no legislation, the New Delhi High Court held that all male employees of unaided recognised private schools were entitled to paternity leave, thus a small victory was granted in terms of paternity leave. 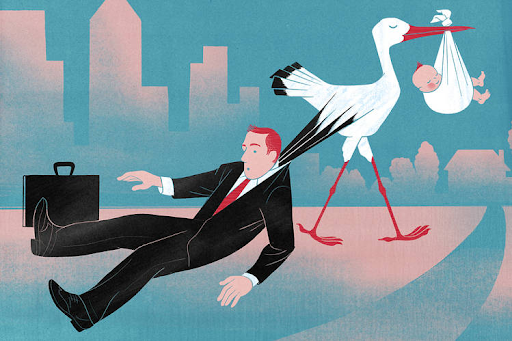 A recent report by UNICEF analysed the amount of legally protected annual leave for new parents in 41 of the world’s richest countries. 40 of them offered paid leave for new mothers, while just 26 offered it for new fathers. The countries offering the most generous paternity leave are Japan (30 weeks at full pay) and South Korea (15 weeks paid at reduced rate). It has been observed that even despite such generous leave benefits, many fathers refrain to actually avail them (in Japan, only 5 percent of working fathers do so) which highlights the fact that the global workforce remains plagued with issues of gender inequality and entrenched patriarchy at large.

Moving the lens of critique to India, the status of paternity leaves here, is primitive at best, and great strides in both legislation and employer attitudes need to be made in order to bring about any real, on- ground change. While legislation is a temporary short term approach, change in mindset, a more systemic, engrained problem, will have to see years and years of effort before it translates into visible outcomes.

1 thought on “Paternity Leave in India”